For youth impacted by conflict, a degree is the gateway to self-reliance. It is all they dream of!

In 2015, the Institute of International Education (IIE) estimated, based on the pre-war gross enrollment ratio, that 450,000 university-aged Syrian students were refugees. Of these, some 150,000, were, as of the spring of 2016, believed to be qualified for university admission. (The count of university-ready Syrian refugees has fluctuated widely in the last 12 months.) As of last March, fewer than six percent had reportedly found placements. 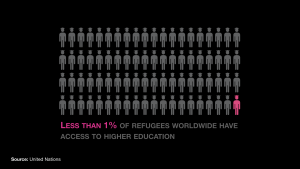