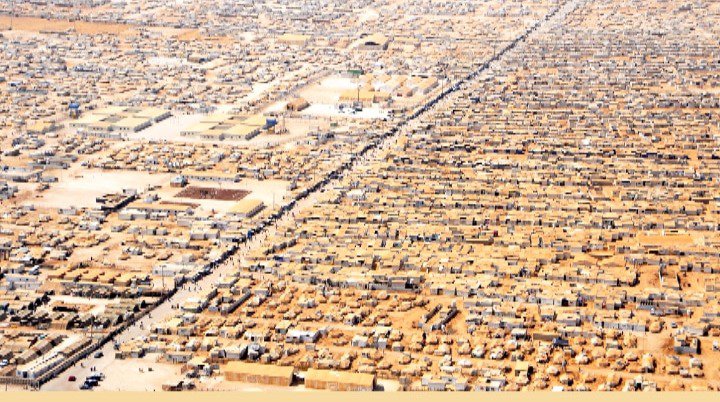 The Za’atari camp is a camp for Syrian refugees who were displaced to Jordan at the end of 2012 because of the Syrian civil war that broke out in 2011. The camp was created about 20 km east of Mafraq, Northeast Jordan in the Mafraq Governorate.

Five things you do not know about Za’tari camp in Jordan:

1 – The Za’atari camp has become similar to natural cities where there are schools as well as educational, art, commercial and leisure services.

2 – The location of Za’atari camp is in a dry desert area. This has benefitted displaced Syrians because our needs for basic necessities have inspired invention. We needed ways to adapt to the living situation in this desert and we were able to adapt through new inventions and industries, including mini-cooling air conditioners made by hand without machines.

3 – The Za’tari camp has a hot summer climate. In most countries there are four seasons in the year except in Za’tari camp. Here there is only the presence of two seasons: a very warm desert climate and a stormy season. In the daytime it is very warm and at night very cool; autumn and spring we never feel.

4 – The presence of prospects for those in Za’atari because of population increase in the camp has resulted in the construction of 14 schools. All provide an appropriate environment for students in terms of education, entertainment and nutrition. This increases the proportion of successful students in secondary school and increases demand for universities in Jordan, but the presence of scholarships to complete student studies is severely limited. There are many students who have not completed their university education from lack of financial capabilities. It is difficult to pay the amount due to the university and students must await scholarships. Here, I want to thank the grant programs for Syrians, including Project Turquoise Program and the Faeroze Fund because I was able to complete my studies in the university. I also want to thank edSeed who helped me create my campaign to complete my dream and my studies to benefit my beloved Syria in the future

5 – There are many organizations interested in refugees that provide many services and educational and entertainment courses for all age groups such as painting, writing, and photography. They are also building a cinema and workshops, especially those with entertainment services including stadiums that include the following sports:
soccer ball
Basketball
Tennis
Table tennis
Handball
Tae Kwon Do
I want to thank His Majesty Prince Ali bin Al Hussein on the establishment of the Great Za’tari stadium that will hold future events.

This is a portrait of the Za’tari camp, where I have lived for nine years through the easy and difficult circumstances. We are refugees, but the word refugee does not mean we are less than other people. We are better people in many ways because we will always look for the best and into the future.
Dania Alkhutaba _Syrian refugee

Please visit my campaign on the edSeed website, I hope you will support me and share it.