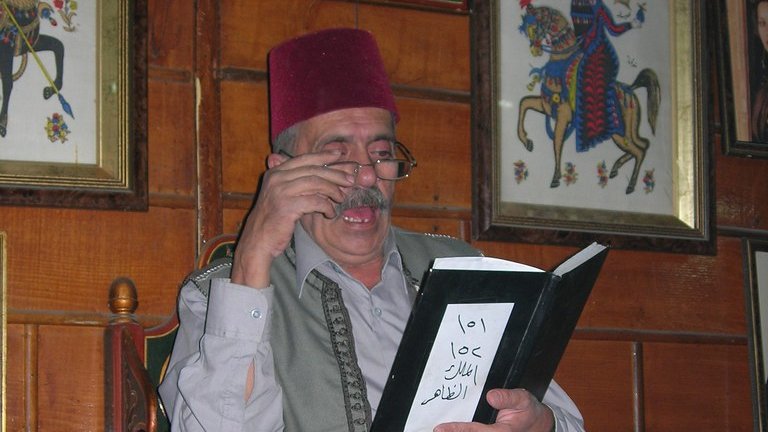 Al Hakawati (The Storyteller). This title is well known to many Syrians, especially residents of Damascus, whose tradition it is to gather in cafes to listen to the stories narrated by ‘al hakawati.’ These were not just ordinary stories, but stories from history, such as the tale of Antarah ibn Shaddad and others, interspersed with some anecdotes and poetry.

One of the most famous cafes in which storytellers used to tell their tales is the Nawfara Cafe. Its construction dates back hundreds of years and is still where people of Damascus meet each other. The Nawfara Cafe is located in Old Damascus next to the Great Umayyad Mosque.

The storyteller would enter the cafe at exactly eight o’clock in the evening wearing traditional Damascene clothes, which are considered part of the heritage of Syria. He would wear a fez – also called a tarboush – and would sit in the middle of the coffee shop on a raised chair, waving a stick in one hand and in the other hand holding the book from which he told the stories. 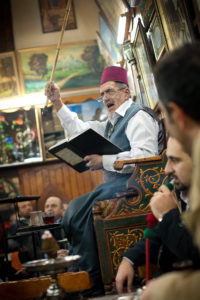 Cafes were filled with people so that no seat would remain empty. People would sit in the street and stare through the windows just to listen to al hakawati’s stories.

This is our heritage, lost from our homeland, and I dream one day that I will return to my country and that wars in this world will end.

I’ll be back one day.