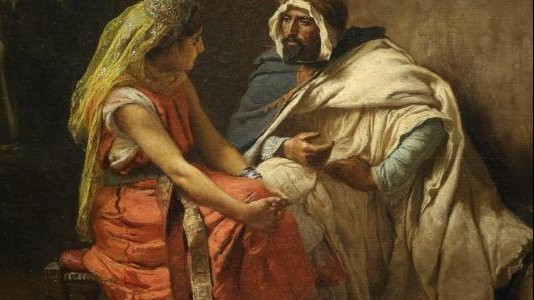 The love story of Al Mu’tamid Ibin Abbad and his wife Etemad Al Rumaikiyyah is one of the most romantic love stories in Andalusian history.

Historians believe that Prince Mohammad Ibin Abbad first met Etemad Al-Rumaykiah, his wife, near a valley he was passing through with his minister.

The prince recited a line of poetry and asked his minister to complete the second half, but the latter couldn’t. Etemad who was washing her clothes nearby, heard the prince and recited the second line.

Prince Mohammad married Etemad. This is how their love story began. Because of his deep affection to his wife, , people began calling him Al Mu’tamid. His name was inspired by and derived from her name.

Al-Mu’tamid Ibin Abbad was a poet. He wrote many poems for Etemad; each line of verse in one of these poems began with a letter of her name.

Stories about Al-Mu’tamid’s love for Etemad abide. It is said that he one day learned that his wife loved the snow in Cordoba and was so moved by that she began to cry profusely. Al-Mu’tamid assured her saying:

Do not be sad my love.

I promise you a sight

that would bring happiness

He then his ordered his staff to plant almond trees on Mount Cordoba so that the treetops would look like snow with every blooming season.

On another occasion it was said that while watching from the balcony of her palace, Etemad saw girls washing clothes by the bank of the river and playing in the mud from. She wanted to play like them. When Al Mu’tamid heard about it, he commissioned the palace staff to crush and mix large quantities of perfume, musk, camphor, and rose water with mud. They took the mixture to the river-bank where it was left to be saturated with the scent of roses and musk. He then took her to the valley to play in the rose scented mud like other girls.

Al Mu’tamid loved his wife dearly until his death in 1095.

Al Mu’tamid and Etemad were buried next to each other in Morocco, and today, their shrine is a popular tourist attraction.