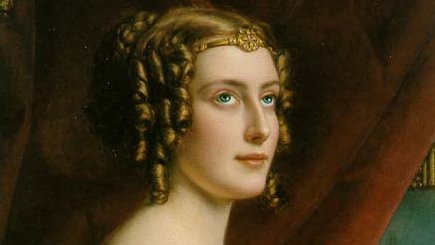 150 years ago, Jane Digby, the great English beauty, left her palace to live a love story in the Syrian desert.

Jane Digby was married four times, including to Prince Ludwig I of Bavaria. Her love of travel took her to the East in 1852. In Syria, she fell in love with a Bedouin in the Syrian desert.

Lady Digby was intelligent and she spoke eight languages. Europe’s wealthy men courted her and only few among them were lucky enough to be in her company.
The Al-Masrab clan controlled Palmyra and they used to accompany the tourists on their trips in exchange for money. Sheikh Medjuel accompanied a group of Serbs who were traveling with Mrs. Digby, and during their tour to Palmyra, bandits attacked them. The princess was afraid and started screaming. Sheikh Medjuel said to her, “Do not worry, do not be afraid, I will protect you.” Sheikh Majoul was able to protect the princess and get rid of the bandits. The princess was impressed by Sheikh Majoul’s courage and his horsemanship, and a love story began between them. Sheikh Medjuel married Jane Digby, and they lived together in a tent in the Syrian desert.

Jane Digby wore Bedouin clothing (worn by the people of the desert), milked sheep, and walked barefoot in the desert. Everyone loved her and started to call her the mother of milk because of her very white skin.

Lady Digby lived the Bedouin life and owned 250 camels. Two years before her death, she moved to Damascus and bought a house and an orchard, where Lady Anne Blunt – a famous English baroness who was also a horse breeder – visited her. Jane Digby died due to a cholera epidemic and was buried in Damascus. On her grave is written in Arabic: Madame Digby Al-Masrab. Sheikh Medjuel died six years later.

The love story of Sheikh Medjuel and Lady Jane Digby lasted for thirty years and became the subject of many writers and novelists.