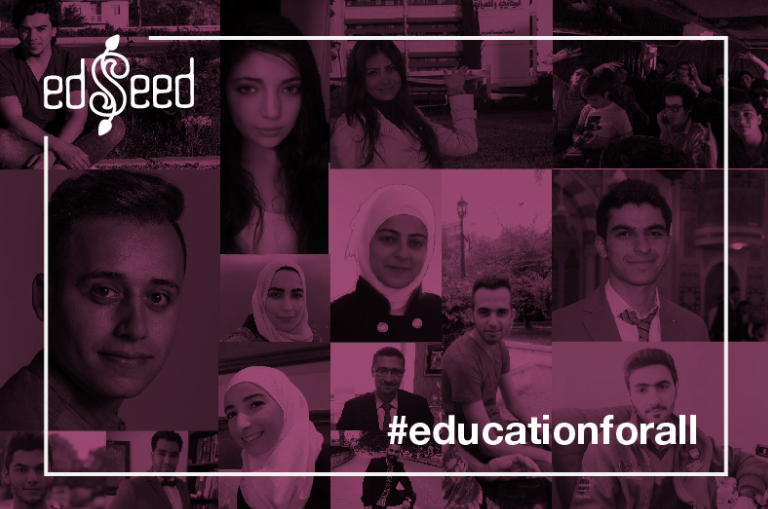 Of all the population groups impacted by recent Middle East upheavals, Arab youth seem to be the one that endured more losses. Displacement has hit this group very hard, and especially of the Higher education sector.

According to 2016 statistics, there are 65 million refugees around the world. Less than 1% of them were able to attain a college education, which means that the hopes for a better future for tens of thousands of young men and women are completely dashed.

International organizations and others provide humanitarian assistance to refugees, But support for higher education is not forthcoming.

therefore, the education sector had been most adversely affected by the continued upheavals and their aftermath. It is for this reason that edSeed was created to respond to the needs of refugee youth impacted by conflict.

edSeed is an initiative under VIP fund, a non-profit incubator launched in 2015 to empower Arab youth in the fields of education and employment and help promote their creative faculties.

edSeed is a crowdfunding platform that introduces students to potential donors who can finance their college education. Students receive training to upload their information on the platform’s dashboard, where they share their life stories, their skills, their social capital, and their goals. Students then launch their video appeals and solicit funds for their education.

Could edSeed Become the Students’ Optimal Choice in his education life?

The Universal Declaration of Human Rights guarantees everyone the right to education, in his or her country of origin or country of asylum. Whereas only a few refugee students end up landing scholarships to finance their college education, tens of thousands stand in line waiting for similar opportunities. Their dreams remain elusive.

edSeed was founded to attempt to bridge this colossal gap. With enough goodwill, we hope to bridge the funding gap and offer more Arab youth impacted by conflict the chance to pursue their college education.

edSeed is unique in that it alleviates donors’ fears about the way their donations are appropriated. edSeed verifies student’s college enrollment and receives tuition claims.

All donations are then bank wired to the institution DIRECTLY and credited to the students’ accounts.

Through edSeed’s internet-based user-friendly dashboard, donors can check information on campaigns and educational institutions in real-time as well as other donations to the campaigns.

Students can continuously update their campaigns, record their achievements during the academic year, and promote their and other students’ campaigns on social media.

There is one more unique aspect about edSeed. Students who join the platform are required to drive it forward once they are in a position to help other fellow students in need.

We believe in our mission: do unto others, as you would want others to do unto you. This is the golden rule that is echoed in all faiths and cultures. We hope to create a family of scholars who appreciate the opportunities they were given and are willing to pay it forward.

As conflicts continue to rage throughout the Arab world, and given that education shall remain the prerequisite for nation-building, what are your thoughts on crowdfunding? Do you think that it could at least partially resolve the problem of higher education for Arab youth in conflict zones?