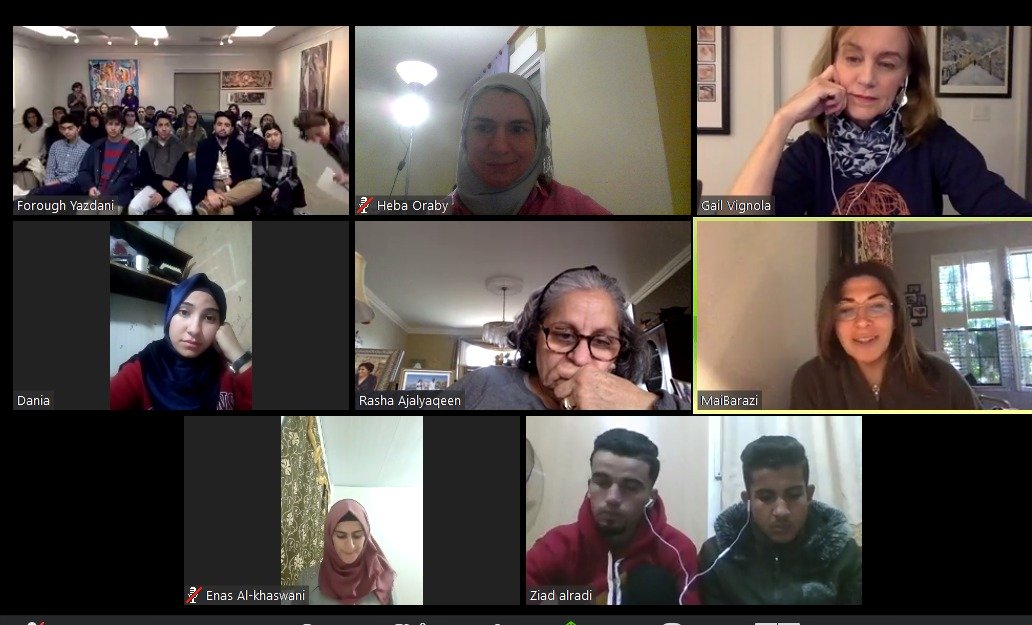 A few years ago, a group of youth and their families traveled from DC to Jordan and visited Zaatari camp. They met with youth their age, found common grounds and committed to keep them in their minds and hearts.

A couple of years later, Project Turquoise (PT) was established, and the DC youth and their families began funding the university education of four Zaatari youth colleagues through edSeed.

Last Sunday, the two groups met online. What follows is a transcript of the call,  highlights of what the two youth groups are learning from each other and a summary for new ideas they want to embark on:

We are so happy to share with you highlights of the first Cross-Atlantic meeting between Project Turquoise (PT)  students and Senior team in Washington, D.C, the edSeed Team in NY, NJ, Texas and Salamanca/Spain, and our four brave Zaatari students in Zaatari camp, Jordan who are now freshmen at Zarqa University.

I asked Zaatari students about the challenges they faced in their first semester. They spoke about the new rhythm of college, building relationships and adjusting to the commute and rigorous study schedules. They wake up at 5:00 A.M.  to be able to get to class on time and spend at least 12 hours at Zarqa University. Ziad, an accounting Freshman said his school-work has been great, his professor is so proud of him that other sophomore students already heard about him. He is already playing soccer with the University team. Danya, studying Pharmacy, also shared her success story, how she is using her social skills to make new friends and learn. Ammar, Freshman Nursing, said he needed to adjust on a personal and academic level. He felt getting to college has already added to his social and learning skills.

PT students were enthusiastic and genuinely engaged. They asked the Zaatari group about their school work, hobbies (Soccer and Tae Kwon Do) and study skills..etc, and they remembered the students by name and knew their individual interests. They were so mature. So impressive, really.

Gail Vignola, VIP.fund board member asked PT students what in their view could incentivize US students to get involved with Syrian refugee causes. She also asked them if they spoke to other youth in their schools about their experience in Zaatari and Lebanon since they could now vote and bring about change. A PT student said that meeting Zaatari students in person gives the interaction a human feel. Philanthropy is no longer abstract. One is not simply giving to a cause but to a person whose life he/she is making a big difference.

Another PT student said that meeting the Zaatari youth reinforced the “oneness” of the human experience. While recognizing how different were their circumstances, in effect they were so much alike: teenagers who played soccer had pets and many dreams.  Mai Barazi, VIP.fund board member asked the Zaatari students about the support they get from their families now that they are in college. They unanimously confirmed that they are the first of their siblings to attend college, that they have acquired a new status and have been now relieved from housework because they have to dedicate their time and effort to their school work.

The PT team said that their youth committee will be more than happy to meet with us to discuss ways of reaching out and getting more involved personally.

PT seniors also asked Zaatari youth if they were in touch with other members of the Zaatari larger team. Some said they were. Mariam Nuseirat was one of the PT student group who has just launched her campaign on edSeed’s platform.  Amnah Al-Eid also heard about the PT initiative and reached out to edSeed… Dara, who knew Ziad and had to leave early because of the snowstorm got on Zoom from upstate NY and talked to Ziad. He gave Ziad the Egyptian soccer team Jersey which Ziad wore to a tournament yesterday and scored two goals.

The meeting was electrifying despite poor connectivity at the Zaatari end.

I was humbled by the PT leadership’s praise for our efforts at edSeed to get special tuition fee reduction from AlZarqa University.  Credit goes to the AlZarqa University Registrar General, Dr. Khaled Hamaidah, and Mr. Ebraheem Hariri. Thanks to their efforts, PT scholarships covered four scholarships instead of the two originally envisaged.

I told the PT students that their initiative expanded the pool of students we at edSeed are helping now and that we have five more students from Zaatari who will soon be launching their campaigns.

As a result, we plan to expand our mentorship program to include exchanges between PT and Zaatari students to help them with English language skills.

In response to Gail’s questions, PT senior team offered to arrange for a meeting with the Youth Committee to share some thoughts on possible engagement of students from Seton Hall University.

I am grateful for PT’s team involvement and enthusiasm. We have a lot to learn I guess.

Founder of the Ammar AlShami fund